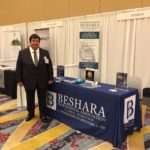 Edward Beshara, Managing Partner, was proud to be a sponsor of the IIUSA (Invest in the USA) EB-5 Advocacy Conference that took place at the vibrant Mariott Marquis, completed in May 2014 with the help of EB-5 investment.

Edward Beshara was a guest speaker on a panel that discussed how authenticating the lawful source of investment funds of the investor is affected by FACTA and the Panama Papers. The panel titled, “Changing Fast: Source of Funds in the FATCA, post-Panama Papers World of Today” consisted of the top and experienced EB-5 immigration attorneys.

Edward Beshara Sponsor and Guest Speaker at The Beirut International Property Fair May 12-14, 2017 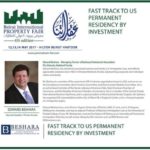 Edward Beshara, Managing Partner, will be exhibiting at the Beirut International Property Fair that is taking place at the Hilton Beirut Habtoor Grand Hotel & Convention Center from May 12 to 14, 2017.
This Real Estate Fair will target Professionals from different aspects of the industry, from Beirut as well regional countries & the GCC.

Mr. Beshara will also be giving a presentation titled: “Fast Track to US Permanent Residency by Investment”. 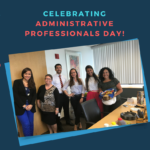 Extension of the EB-5 Regional Center Program till Septemeber 30, 2017

On May 1, 2017, Congressional leaders have reached a deal to fund the government through the rest of the government’s fiscal year. Republican and Democratic lawmakers agreed to a $1.070 trillion package to fund the government through September 30. This deal includes a clean extension of the EB-5 Regional Center Program through the same date. Here are the Bill (Refer to P. 734) and the Explanatory Statement (Refer to P. 65).
The revised Form I-924 Application for Regional Center Designation
U.S. Citizenship and Immigration Services (USCIS) had a webinar on Wednesday, April 26, from 1 to 2 p.m. to discuss the Form I-924, Application for Regional Center Designation Under the Immigrant Investor Program. This webinar discussed certain changes to the Dec. 23, 2016, edition of Form I-924. To learn more click here.
EB-2 Degree Determinations Are Case-Specific
U.S. Citizenship and Immigration Services said this week that it must conduct a case-specific analysis to determine whether a beneficiary who received a provisional certificate had completed all requirements to earn the degree. Read the policy memorandum here.
Redesigned Green Cards and Employment Authorization Documents
U.S. Citizenship and Immigration Services today announced a redesign to the Permanent Resident Card (also known as a Green Card) and the Employment Authorization Document (EAD) as part of the Next Generation Secure Identification Document Project. USCIS will begin issuing the new cards on May 1, 2017. Read the details here.
Trump signs executive order reviewing H-1B visa program April 18
President Donald Trump signed an executive order directing the government to review its policies on the H-1B visa program, as the administration says it looks to cut down on abuse in the system designed for high-skilled workers. Under the order, agencies involved with the program will be tasked with reviewing how visas are granted, although it’s unclear what changes would be implemented after the review. Recommendations on changes will be left to the agencies involved in the program. For a copy of the executive order click here.
A new draft of EB-5 reform and reauthorization
On April 18, Senate Judiciary Chair, Chuck Grassley, and former Ranking Member, Patrick Leahy (now Ranking Member of the Senate Appropriations Committee), released a new draft of EB-5 reform and reauthorization. To read their letter to the Congress click here.
Useful Links: