The EB-5 panel discussion was a huge success, quoting Bruno L’ecuyer, CEO of the Investment Migration Council: “your panel was balanced and really well organized. I know it is not easy to manage such sessions with so many important people on stage with you.” The panel was titled: “United States EB-5 Program in the Age of Trump.” 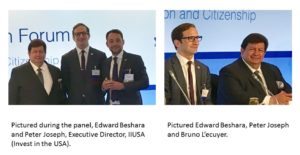 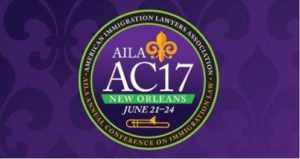 Edward Beshara, Managing Partner, will be attending the AILA Annual Conference on Immigration Law on June 21-24, 2017, in New Orleans.

While in New Orleans, Edward will also attend the first meeting for The Global Migration Section Steering Committee on June 22, 2017

Extensive Questioning for Some Visa Applicants Approved
The Trump administration has signed off on a newly detailed questionnaire for visa applicants worldwide that calls for data such as their social media user names and 15 years’ worth of travel, employment, and other biographical information. All visa applicants should continue to be prepared for additional scrutiny and the possibility of longer wait times for visa approvals. Read More

Regional Center Termination Notices
USCIS is now proactively publishing Regional Center termination notices as they become available, which is consistent with our commitment to transparency in the EB-5 program. Read More

Laptop Ban May Extend To 71 Airports, DHS Head Says
On June 7, 2017, The U.S. Department of Homeland Security chief told a House panel that the federal government is considering an expansion of its ban on large electronics, like laptops, in carry-on bags from the 10 current airports to up to 71 airports for U.S.-bound flights. Read More

USCIS Q2 (Jan to Mar 2017) Statistics for I-526/I-829 Petitions published
The USCIS Immigration and Citizenship Data page has been updated with data from FY2017 Q2 (January to March) for petitions including I-526 and I-829. Here are some of the  findings: