About the RAISE Act

The U.S. has the EB-5 program, which is very different to the residency by investment programs adopted in Australia and Canada.

Therefore, we do not believe the RAISE Act, as written, will be effective for U.S. immigration, and more likely than not, will not be passed.

The Beshara Global Migration Law Firm would like to thank 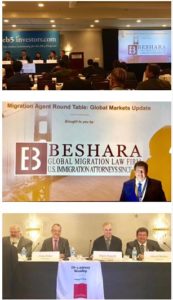 EB5Investors.com for the excellent planning in organizing the 2017 San Francisco EB-5 & Investment Immigration Convention. The conference was a great experience and benefit, exchanging ideas and networking with the industry professionals.

Beshara Global Migration Law Firm was also a sponsor of the panel “Migration Agent Round Table.”

Edward Beshara was a speaker on the Attorney Workshop panel titled “Project Failure pre-and post I-526 Approval.” Edward would like to thank industry professionals and leaders who were on the panel with him, Daniel B. Lundy, Esq., Klasko Immigration Law Partners, LLP, Cletus M. Weber, Esq., Peng & Weber and Angelo Paparelli, Partner Seyfarth Shaw LLP, for a successful panel that was informative and interactive. A few hundred attendees were present and asked questions.

Edward Beshara was appointed by the Investment Migration Council (IMC) Governing Board, as a member of the IMC Advisory Committee (ADCOM), effective August 4, 2017. IMC is headquartered in Geneva, Switzerland and is an Association of members including country specific residency and citizenship by investment program representatives, attorneys, migration agents and service providers. Edward is looking forward to sharing his 35 years of experience in Business Immigration with the Advisory Committee and the global members in general. 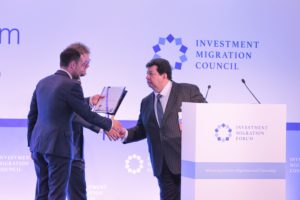 Attorneys Edward Beshara, Sal Picataggio, EJ Jen, and Brazilian Liaison and Paralegal Andrea Almeida of the Beshara Global Migration Law Firm will be attending the 2017 Annual Convention and Trade Expo which will take place on August 16 and 17, 2017 at Rosen Shingle Creek – in Orlando, FL, to network with realtors, developers, and others within the Florida Real Estate industry.

Tom Cotton (R-Ark.) and David Perdue (R-Ga.), two senators, released a revised version of the “Reforming American Immigration for Strong Economy” (RAISE) Act, a bill that recognizes the American people as the primary stakeholders in the immigration system. President Donald Trump supported the new legislation. Cotton and Perdue’s would now make the immigration process primarily points-based. The RAISE Act aims to replace the current employment-based green card framework with a points system. Nations like Australia and Canada already use a similar system. This merit-based system would award points based on education, English proficiency, job skills, age (meaning prime working age), and entrepreneurial investment—factors that aim to prioritize those best able to succeed and contribute to the American economy. Read the Bill Here, and President Donald Trump’s Statement Here.