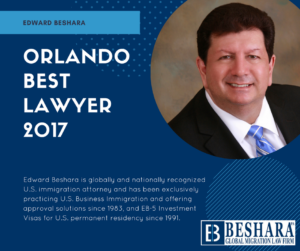 Woman of the Year! 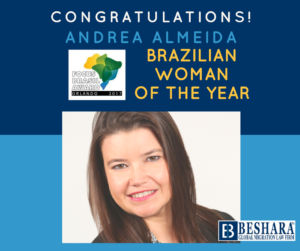 Huge congratulations to Andrea Almeida, Beshara P.A. Global Migration Law Firm, paralegal and Brazilian Liaison, for being selected as the woman of the year for Focus Brasil Orlando 2017. Focus Brasil is one of the most important Brazilian events. Its mission is to bridge Brazil and Brazilian community living in the U.S. with local communities, especially in Business, Arts, Culture and Educational areas.

Beshara P.A. Global Migration Law Firm will be sponsoring the Central Florida Brazilian American Chamber of Commerce (CFBACC) Pavilion at the Brazilian Day Orlando Festival that will take place at Lake Eola in downtown Orlando, from noon to 8 PM. Bring your Family and Friends to this fun and free event. Our law firm will be located in the Central Florida Brazilian American Chamber of Commerce tent (near the Amphitheater). We will have a table for information sheets and will be able to meet you in person. See You There!

Brasil is one of the most important Brazilian events. Its mission is to bridge Brazil and Brazilian community living in the U.S. with local communities, especially in Business, Arts, Culture and Educational areas.

Edward Beshara will be speaking on the Business Seminar Day (Thursday, September 23, 2017) on a panel titled “Immigration and Tax Process”.

USCIS webinar on the Form I-924A

USCIS held a webinar to discuss the latest version of Form I-924A, Annual Certification of Regional Center. The webinar was technical and specifically focused on Form I-924A — what’s new in the December 23, 2016 version of the form, and how to complete it. USCIS has linked an official recording to the webinar page

On August 23, USCIS issued policy guidance in the USCIS Policy Manual to address the general policies and procedures applicable to the adjudication of waivers of inadmissibility.

Volume 9: Waivers, Part A, Waiver Policies and Procedures [9 USCIS-PM A].

On Aug. 22, 2017, President Trump signed the Northern Mariana Islands Economic Expansion Act, H.R. 339, revising the visa classification for Commonwealth of the Northern Mariana Islands (CNMI) Transitional Workers. This visa classification, referred to as the CW-1 visa, allows employers within the CNMI to apply for permission to employ foreign (nonimmigrant) workers who are otherwise ineligible to work under other nonimmigrant worker categories.

September 2017 visa bulletin has been published

The U.S. State Department has just released the September 2017 Visa Bulletin which is the last Visa Bulletin for the FY2017 fiscal year. Check the bulletin here Read the analysis here