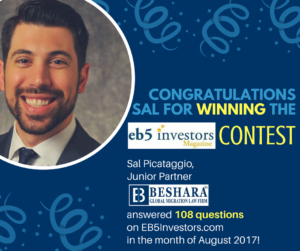 the EB5Investors.com website for the month of August 2017 as he had the most answers published on their questions page. Sal won a free ticket to the Las Vegas EB-5 & Global Investment Immigration Convention on January 27, 2018.  EB5investors.com is a one-stop-shop for the EB-5 visa needs. Their main intention is to help investors learn about the EB-5 Visa program and give them direct access to professionals. Sal is a verified attorney by the EB5investors.com.

Beshara P.A. Global Migration Law Firm will be attending and sponsoring the

The 2017 ORRA Affiliate Forum Realtor Expo is the perfect venue to network face to face with realtors and promote the firm among over 600 attendees. We are proud to be Affiliates of the Orlando Regional Realtor Association.

Edward Beshara, Managing Partner, will be speaking, attending and sponsoring

As a sponsor and speaker, Edward is happy to extend a special rate to friends and associates who are interested in attending the event. All you have to do is send them the event link here, and when they go to purchase a ticket they can enter the promo code “2017MiamiSponsors” to receive a $100 discount.

Brasil is one of the most important Brazilian events. Its mission is to bridge Brazil and Brazilian community living in the U.S. with local communities, especially in Business, Arts, Culture and Educational areas.

The new proclamation will come into effect on October 18, 2017. There will be clarification as to which foreign nationals from these banned countries will be exempt from the ban.

The three senators announced the SUCCEED Act (Solution for Undocumented Children through Careers Employment Education and Defending our nation), which they called a “fair and compassionate” merit-based solution to issues facing undocumented children currently in the U.S.

U.S. Citizenship and Immigration Services (USCIS) is no longer accepting petitions from U. S. employers seeking to hire temporary nonagricultural workers under the one-time increase to the Fiscal Year (FY) 2017 H-2B cap announced in July.

Temporary Protected Status for Sudan to Terminate in November 2018

Acting Secretary of Homeland Security Elaine Duke has determined that conditions in Sudan no longer support its designation for Temporary Protected Status (TPS) after reviewing country conditions and after Department of Homeland Security (DHS) officials’ consultations with the appropriate U.S. government agencies. Acting Secretary Duke is extending benefits for beneficiaries of Sudan TPS for 12 months to allow for an orderly transition before the designation terminates on Nov. 2, 2018. Read Details Here