US RESIDENCY BY INVESTMENT, A NEW ERA! 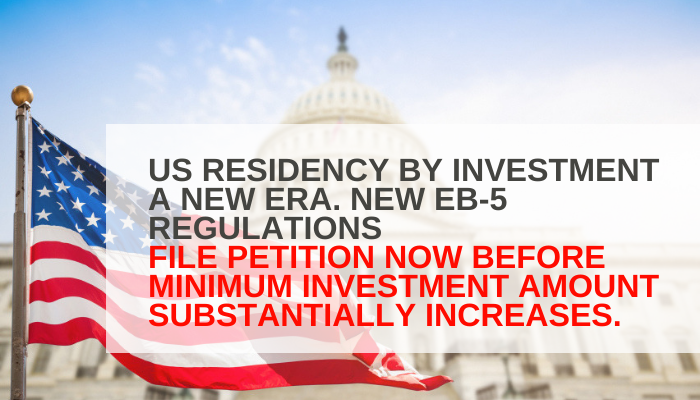 US RESIDENCY BY INVESTMENT

The minimum $500,000 investment amount into a qualifying EB-5 project in either a rural or high unemployment area (“Targeted Employment Areas or TEAs”) has not changed since the United States Congress created the modern EB-5 program in 1990.  If the project is not in a TEA or Rural area, then the investment is US$ 1 million.

New legislation will hopefully provide permanency or a long-term extension for the EB-5 Regional Center program without the need for constant continuous resolutions being initiated by U.S. Congress. As we all aware any new legislation would override any new regulations. However, until there is new legislation, the USCIS (United States Citizenship and Immigration Services) regulations which have been issued by the Department of Homeland Security (DHS) controls the EB-5 investment requirements after November 21, 2019.

On June 27, 2019, the Office of Management and Budget (OMB) announced that it has concluded its review of the EB-5 Immigrant Investor Program Modernization Rule and reference that “substantial changes” have been made to the original proposal.

The new EB-5 Regulations have been now established and have a grace period until November 21, 2019, to allow EB-5 investors to invest at the current investment rate of US$500,000, either in an EB-5 project in a TEA or Rural Area.

The new Regulations radically redefine TEAs to limit them to the location of the census tract of the EB-5 project and any adjacent census tracts, provided that the weighted average unemployment level is at least 150% of the national average. Rural TEAs continue to be defined as outside of an MSA and outside of any city or town with a population of 20,000 or more. The new regulations also stripped States of the authority to determine TEA boundaries, and instead placed that authority with the USCIS (DHS).

Those individuals considering EB-5 would be prudent to move forward at once since time really is running out.

It is advisable that a foreign national investor contemplating the EB-5 investment consult with qualified legal counsel specializing in EB-5 matter. The preparation and filing of an EB-5 petition have to be approvable and detailed to avoid a denial.

The possibility of a denial of an EB-5 petition by USCIS will create an extra burden associated with proving the authentication of the lawful source of funds, path of funds and compliance with currency exchanges and wire transferring money out of foreign countries.

That is, USCIS may reserve the right to issue an outright denial, with no chance to cure any deficiencies by a Request For Evidence, if the initial filing was considered deficient.

Furthermore, if the investor files an I-526 petition which incorporates the EB-5 project request that the geographical area for the project, is in a TEA, the investor and the project must wait for the Federal Government (DHS) decision. If it is a TEA area the new amount is US$900,000 and if it is not a TEA or Rural Area the amount is US$1,800,000. The emphasis after November 21, 2019, will be for EB-5 projects and investors to purposely rely on a conservative analysis to determine if a project is in a TEA

As stated, it is advisable and necessary to file the EB-5 petition with USCIS before November 21, 2019, as these cases will not be affected by the new regulation.

Likewise, for EB-5 projects, there is a limited window to get new investors to sign up, transfer their funds, and file I-526 petitions before the effective date of the regulation.  The EB-5 industry expectation is that there will be a substantial increase in the number of EB-5 investor filings before November 21, 2019.

The new Regulations change in the investment amount and TEA definitions could be disruptive to existing EB-5 projects that are only partially funded through their capital raises. The new TEA definition will most likely cause most EB-5 projects after November 21, 2019, not to be considered a project in a TEA.

Therefore, it is probable that many of the existing EB-5 projects will no longer qualify for the lower threshold investment of US$900,000.

As a result, these are important questions that will be asked.

Will these projects be able to raise EB-5 investment capital at the higher threshold?

How many projects will not be able to complete their EB-5 raise and what are the consequences for existing investors?

An important question is, if all the EB-5 financing was not raised prior to new regulations, would the project still move forward and be completed by traditional non-EB5 funding.

There are over 800 USCIS approved Regional Centers. An approval of a Regional Center does not mean the regional center will provide you with the immigration success that is truly each investors’ goal. The foreign national investor may decide to look for an EB-5 Regional Center with a long history of success and one that will show you the greatest likelihood of achieving your goal of U.S. Permanent Residency in the United States, and the compliant exit strategy which would allow legally a return of capital to the investor. U.S. immigration attorneys can provide U.S. immigration advice and due diligence but cannot offer investment advice about an EB-5 project. That is, licensed investment or financial advisors can offer investment advice.

It is important to be aware that a Regional Center designation by USCIS, or a pre-approved EB-5 project by USCIS, does not endorse the financial or business viability of the project.

To ensure all EB-5 petitions are properly submitted, and approvable, the foreign national investor may contact the Beshara law office so that they may start the preparation of the EB-5 petition to be filed before November 21, 2019. The first consultation will analyze the facts of the case and provide definitive answers to questions asked by the potential foreign national investor.

Recipient of Invest in the USA (IIUSA) 2019 Award for Economic Advancement “Innovator Award”.

Among Top 25 EB-5 Immigration Attorneys in the U.S. (EB5Investors Magazine’s). Speaker on many national and global EB-5 panels and author of many EB-5 articles.