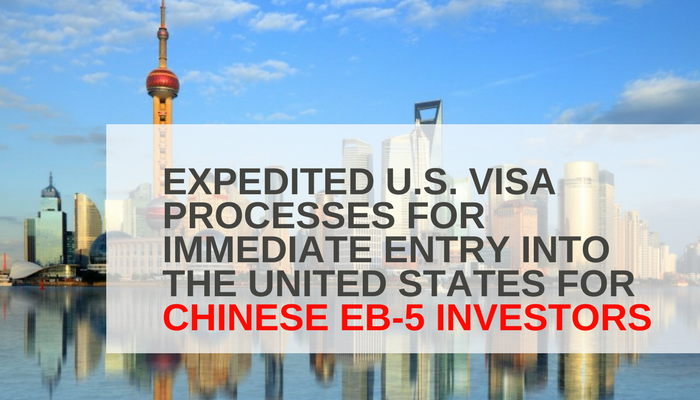 For the Chinese foreign national, the United States is the primary destination to live, work, and study.

Over the past ten years, the Chinese have been obtaining permanent residency through their personal investment in an EB-5 Regional Center project. The demand continues to grow and is substantial to this day.

There are 10,000 EB-5 visas issued per year for the primary investor and family members. There are per-country limits or quotas, but most countries are well below their EB-5 quotas. Based upon this underutilization from other countries, the Chinese practice of using the underutilized visa numbers from other countries has grown substantially grew over the last 10 years.

The Chinese investor in most cases would like to see themselves or family members start to live or work, or for their children to attend school immediately or within a very short period of time (hopefully months instead of years).

However, the Chinese demand for the EB-5 visas exceeds the supply, which has resulted in a substantial delay between the date an investor’s petition is filed, the positive adjudication of the petition, and the U.S. consulate process for conditional permanent residency. In fact, the delay, known as retrogression, is several years and may increase or decrease from month to month.

Some Chinese investors still intend to pursue their investment in the EB-5 Regional Center project but intend to first have themselves and family members more quickly obtain a temporary visa to come to the US and wait in the U.S. for the EB-5 conditional permanent residency to be issued, allowing the investor and family members to live and work in the United States as permanent residents.

Fortunately, there are several temporary and even permanent visas which would allow the Chinese investor or family members to quickly enter the United States:

These Chinese businesses may be substantial in respect to gross revenue and number of employees and may wish to set up or have already set up U.S. operations through a merger or acquisition, creating a qualifying relationship (affiliate or subsidiary). A similar organizational hierarchy, substantial revenue, and large number of employees should also exist for the U.S. operation.

The petition can be expedited (for a fee), and USCIS will respond within 15 business days from the date of filing. The approval notice can be sent by USCIS to the U.S. consulate in China (for example, Guangzhou), and the L-1 executive, spouse, and minor children can apply for the issuance of the L-1 visa for the executive, and L-2 visas for the family members. The initial L-1 petition is granted for a period of 3 years (if the U.S. business already exists).

Once the U.S. Consulate approves the L-1 and L-2 Visas, the family can enter the U.S., and the principal executive can start employment and direction of the U.S. operation. The children may attend school and the spouse can apply for employment authorization and work anywhere. All family members can obtain social security numbers.

From the start of representation to the granting of the L visas, the average time may be a matter of several months, compared to several years with the EB-5 process.

Once the Chinese L-1 executive arrives in the United States, the Chinese national and family members often arrange a conference with their immigration counsel. Here, we discuss if the L-1 executive can immediately apply for permanent residency in the United States via the EB-1 multinational executive/manager status. There are per-country limits to who can obtain permanent residency as a multinational executive or manager, as there are with the EB-5 process

The filing of the immigrant petition for the multinational executive or manager places him or her in a waiting line, as there is with the EB-5 visa. As of August 2017, the wait time between filing the immigrant petition and filing for permanent residency is about five years. In the meantime, the executive can maintain their L-1 status, work in the United States, and travel into and out of the United States.

The good news is that these wait times change from month to month, and it is anticipated that the wait times may be reduced dramatically in October of 2017. Even though the EB-1 Immigrant petitions can be approved quickly, the wait times will dictate when one can apply for permanent residency.

Quick Entry into the U.S. and Temporary Residency for Investors (E-2) and Path to Permanent Residency (EB-5)

Another way for an immediate entry into the U.S. for a Chinese national is the E-2 visa category.

Foreign nationals who are citizens of countries that have an international treaty or agreement with the U.S. may take advantage of the E-2 Visas to enter the United States. Therefore, Chinese nationals with dual nationalities or whose spouse is a national of a treaty country may take advantage, as China itself does not have a treaty for E-2 visas.

The E-2 visa is for a foreign national investor who makes a substantial investment in a new or existing U.S. business.

The E-2 application is supported by a business plan to show how the funds are being spent, jobs will be created, how the business will remain active and viable for the next five years, and refers to the Chinese applicant’s salary that must be sufficient to support him or herself and their family.

If the E-2 business continues to be successful, the E-2 investor can consider making an additional investment into the business and create direct jobs. By considering this and the budget needed to grow the U.S. operation, the E-2 visa can be converted into an EB-5 visa.

The Chinese investor should work with their immigration attorney and a U.S. CPA to review their business, finances, and investment to show a total investment of $500,000 under today’s EB-5 requirements. The total investment cannot be from retained earnings or reinvestment from the E-2 business, but the previous E-2 investment and job creation can be counted toward satisfying the EB-5 requirements. For example, if the E-2 investment was $200,000, then the Chinese investor needs to show they have $300,000 in the U.S. corporate account or trust account, committed to the U.S. enterprise.

Another business plan will be needed to comply with EB-5 requirements, showing how the total investment, from authenticated sources, will be used to create 10 full time, direct jobs.

If the Chinese investor feels that there is no way that the business can create 10 jobs itself, they, as owners of the business, can seek out an EB-5 Regional Center to rent out its license, and the business can show indirect job creation through approved economic methodologies.

Another method of quick entry and permanent residency is for Chinese nationals who have received sustained national or international recognition for their achievements in business, the arts, science, or athletics.

This category, aliens of extraordinary ability, requires substantial documentation to show recognition in the media, awards, support from other experts in the field, high salary or remuneration, and a substantial benefit to the United States

Aliens who may consider this category include athletes, coaches, business directors and executives, inventors, actors and singers, and many other professions.

This category has a waiting period of five years for a green card, but again, these times may drop in October as the visa availability is recalculated for each new financial year.

A Chinese investor subject to the waiting period for EB-5 priority dates can look to their spouse for help.

If a Chinse investor has a spouse who was born in Australia, Korea, or any country other than China, the Chinese investor may use the spouse’s place of birth to determine their waiting period.

This concept of cross-chargeability would place the family in the position of a non-China birth country, which currently allows immediate green card processing.

There are also many Chinese born national who are students in the United States under the F-1 visa category. Many Chinese parents desire to make gifts of investment funds to their children studying in the United States for EB-5 investment purposes. The Chinese students may opportunities to marry another student born in a country other than China, and the same cross-chargeability opportunities would be available to them.

Sal Picataggio, Junior Partner of Beshara Professional Association, has practiced immigration law since 2011, focusing on business immigration processes like EB-5, E-2, and L-1 cases. Sal is a member of the American Immigration Lawyer Association (Central Florida Chapter), the Orange County Bar Association (Immigration Committee), Invest in USA, and is an Affiliate of the Orlando Regional Realtor Association and member of the Global Council. Sal received his Juris Doctor from the University of Florida Levin College of Law, where he also served as an Adjunct Professor in 2017.

If you are interested in learning more about EB-5 immigration, please contact us today and our experienced EB-5 attorneys will guide you through the process.