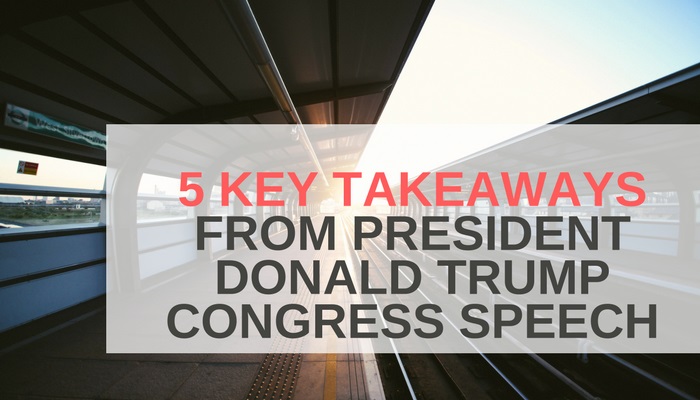 Where are we now?

This past week President Trump gave an address to Congress. These are 5 main takeaways from his speech.

President Trump referred to other countries immigration systems such as Australia. He emphasized the advantages of Australia’s merit point based immigration system which allows qualified and skilled foreign nationals to migrate to the country. The U.S. needs a better entry system. Legal immigration and a better system should lead to an increase in U.S. jobs, security, and allow the immigration laws to be complied with.

Question: Is the above rhetoric by President Trump an argument for supporting a new foundation for the protection of our borders and promoting legal migration in a different and more precise way?

Comment: Will this new foundation cause predictability, clarity, and transparency for the U.S. migration program?

We need new industries, new national infrastructures, we have neglected the inner cities, we need to invest in manufacturing to create new American jobs.

Question: Can we imply that President Trump was promoting indirectly or inadvertently the EB-5 program by his statements in his speech?

Question: Is President Trump stating that refugees from certain named Muslim countries cannot go through a process of proper vetting?

As an example, a Syrian citizen moved to Saudi Arabia 20 years ago and established and invested in a business and lived there with his family. Can we argue proper vetting will occur because Saudi Arabia and the Syrian can provide credible information and documents to authorities? Therefore this Syrian citizen may then choose to become an EB5 investor, even though he is a Syrian citizen. In these circumstances, he is not living in Syria and trying to escape as a refugee.

President Trump emphasized the need to increase U.S. employment opportunities, acknowledged the fact that there is unemployment and manufacturing jobs have been lost, foreign policy regarding trade is a disaster, emphasized the need to create a better U.S. environment so that companies can benefit from new policies and increase their growth in the U.S. which may lead to confidence by foreign national investors and businesses to set up new or invest in existing U.S operations, in a new U.S. business environment.

Comment: It is apparent that the EB-5 program and other investment and business migration processes will be able to provide the funding President Trump needs to achieve his goal of creating U.S. jobs.

President Trump suggested that refugees do not have to receive a permanent status to live and work either in the US or any other third country. President Trump believes in safe havens in the Middle East for displaced persons such as Syrians, who will be taken care of medically, financially, and trained with the ability to return to their home country, in order to rebuild their lives and their country.

Question: Will President Trump establish and renew partnerships with allies in the Middle East in order to achieve peace?

Comment: President Trump’s opinion is that he can only renew America’s foreign policy by directly talking to other countries.

Does this mean that the U.S. foreign policy will circumvent the United Nations?